Welcome in the new blog component, which will reside in the main site from now on. Perhaps this will save time and confusion to users that were sometime lost when navigating through the site and its different sections. 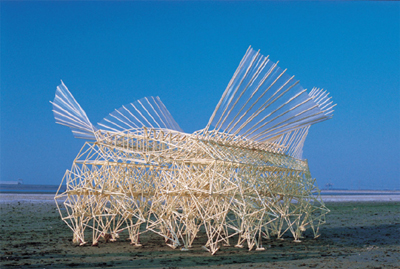 So Theo Jansen has created the strandbeests, creatures like the ones on the left of the image.  Theo Jansen invented a mechanism that allows his creatures to walk like the way real creatures do. It is energy efficient, and really impressive as to how the main body of the creature remains solid and stable while walking.

Theo Jansen’s creations have been inspiration for many mechanics Rototicians and programmers, and the Internet is full of people that try to replicate his leg system, others with success, and others with failure.

What’s most impressive is how he managed to create the initial legs for his creatures. He made some kind of evolving algorithm in order to save some thousands of years (really, that’s how many years his computer would need to make the appropriate calculations to come up with a working leg). 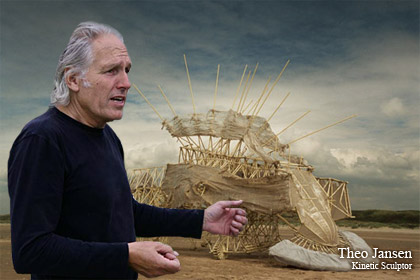 I believe that this algorithm is greater invention than the strandbeests themselves. I also believe that when applied to different sciences, this methodology can make miracles. In programming, that kind of algorithm could be used for creating a form of AI. A computer would accept an initial pre-installed “experiences” and then, as life progressed, the computer would toss the ones that were obsolete, acquire newer, analyze them, extract data from them, and create new logic actions. I am wondering how could this be applied to existing languages or if a new programming language should be created.

Come on, you must admit it. You feel that technology has reached a certain limit. New inventions are not a matter of new ideas anymore. If you need something, you can find a wealth of information about how to do it, without having too much trouble. Nowadays, following instructions is easy. What the world really needs is new ideas, based on evolutionary and revolutionary principles. I believe that the time when the people realize that they need something completely new is not far away. When that time comes evolutionary algorithms such as the one Theo Jansen used to create his creatures will be an inspiration and a guidance.

I am very fond of bug-hunting and fixing. Most people I know consider it one of the tedious aspects of the software engineering cycle. But not me.

It surprises me when some choose not to

The following is an (undoubtedly non-exhaustive, and in no particular order) list of professional advice that I wish someone had given me before I began my professional journey.